Cancer arises in part from genetic mutations in critical regulatory pathways. The current treatments for cancer are: chemotherapy, surgical removal, and radiation; all of which are highly invasive and encourage evolution of cancer cells to more malignant forms. For the BTE-SV 2010 project, we propose a novel approach of delivering tumor suppressor fusion proteins (p16, p21, p27, p53) to cancer cells as a specific and directed cancer therapy.

We choose p16, p21, p27, and p53 because they are all tumor suppressor proteins that play critical roles in regulating cell growth.Â  Coincidentally, these proteins are also inactivated in many forms of cancer. In vitro studies have shown that expression of these critical tumor suppressors in cancer cells causes them to cease aberrant cell growth and invasion, and some times apoptose.

We designed two classes of fusion proteins for receptor-mediated delivery of tumor suppressor proteins. The first class utilizes substance P, a nueropeptide that is internalized when it interacts with its cell surface receptor, nuerokinin-1 receptor (NK1R). The second class uses two flanking protein transduction domain (PTD) that will allow the fusion protein to pass through the lipid bilayer. If not already present, a nuclear localization sequence (NLS) will be added to each construct to guide the fusion protein into the nucleus where they can effect the cell growth pathways. Also, it is well known that expression of heterelogous proteins in e.coli result in insoluble proteins and thus, a nusA tag is added onto the amino end. 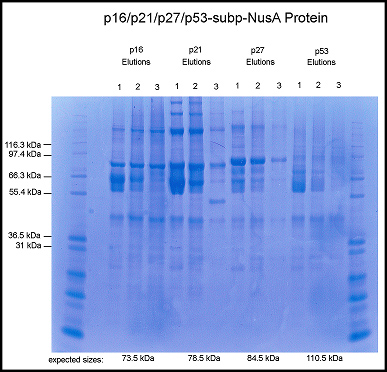