The synthetic biology (SB) revolution began in the mid-1990s, unnamed until the next century. SB is simply the logical consequence of the capability to engineer simple genetic changes into organisms through manipulation of DNA. The key idea is that the behavior of cells and organisms is analogous in some ways to machines, electronic circuits, and computer software programs. By manipulating biomolecules such as DNA, it is possible to create new programs and thus behavior for biological systems. It might even be possible to engineer completely artificial biological organisms. A mycobacterium has already been engineered by Craig Ventor’s group to use DNA synthesized entirely on machines as its genome. A similar project is ongoing for bakers yeast (S. cerevisiae). SB is more of a engineering discipline than biology, perhaps biosystems engineering (BE) would be more apropos. Building complex biological systems and subsystems using knowledge acquired from basic bioresearch has the potential to change the world and human beings. Synthetic biology is in a constant state of upheaval and multiple subfields will likely be spun off. Ultimately systems biology/biosystems engineering is limited only by our imaginations, physics and chemistry.

Phase I: Programming cells, organs, organisms, and communities of organisms. 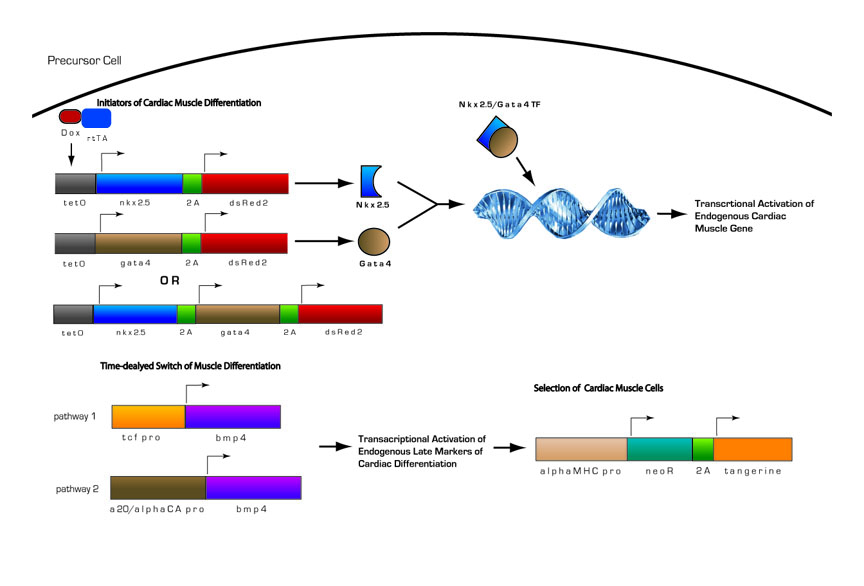 Introducing new biological circuits that interact with, or are orthogonal to existing biological regulatory circuits, biochemical pathways or structures, is now commonplace in SB research. Impressive engineering feats have been reported: from simple projects that allow the common gut bacteria E. coli to act as a photoemulsion, to the demonstration of complex community-based behavior using cell-cell signaling that act similarly to transistor-based logic gates.

To repair damaged human tissue such as that occur after a myocardial infarction (heart attack), RSI is developing biocircuits that program IPS or ES cells to become cardiomyocytes, target damaged heart tissue and then integrate into the heart to effect repair by inducing expression of trophic factors. Early versions of this work were developed as part of our participation in IGEM, the International Genetically Engineered Machine competition.

To promote development of bioenergy, RSI is engineering thermophilic organisms to enhance their ability to breakdown biomass and cooperate to re-synthesize useful materials and biofuel.

Although mostly unexplored, the ability to program subcellular entities and cells to interact with engineered inanimate matter such as silicon-based electronic, optical, mechanical devices or material such as quantum dots, promises to revolutionize materials science. Living composites can tightly integrate programmed biological functions with sophisticated nano and microscale devices.

RSI is developing composite living materials for applications as diverse as wearable biosensors, hybrid solar cells and living machines that can perform useful work within our bodies.

Phase II: Biorobots and bioautomatons and cyborgs at the nano, micro and macro scales.

Although In its infancy, SB/BE makes possible the creation of biorobots, bioautomatons. Biorobots can be made purely from biologically derived materials, from viruses and bacteriophage, from living cells, or from a combination of living and inanimate material, that is, cyborgs. It is with the creation of biorobots, bioautomatons and cyborgs of increasing complexity that the world-changing effects of BE will become apparent.

At RSI, we are designing first generation biorobots for potential use as smart biosensors to repair biological damage inside complex living organisms, and to eradicate harmful pests. At this frontier of bioscience, RSI is defining the cutting edge.

Science fiction writers and futurists have long envisioned a time when biological organisms might be engineered to be more akin to computers than mere self-propagating entities seeking survival. More than a decade ago, a conference attended by science fiction writers and scientists was held, focused on the implications of operating systems for cells. At that time, the actual prospect for such complex systems was remote.

At RSI, we are developing new ways for cells to signal each other with informative messages that may be interpreted by biological circuits of moderate complexity. We anticipate that development of even a simple computing-like biological device will greatly improve the ability of our biorobots to possess the complex behavior necessary for example: to do microsurgery within the human body.

At, RSI we know the future beckons, that technological marvels await us, and that we can make a difference in their realization.