Problems in Science Education
Problem #1: Many students and adults are woefully ignorant of the scientific method and key results, leading to a lack of enthusiasm for science, a diminished talent pool, and uninformed public policy decisions among other negative consequences.  Students and society are both impoverished.  Responsible social and political leaders promote STEM (science, technology, engineering and math) education as a solution, but there is a serious question: how to really make STEM education work?

Problem #2:  Many young people interested in science are taught to eschew creativity and originality for conventional and dogmatic approaches, miring the field in quagmires defended by scientist-bureaucrats. Thus, reducing the probability of true scientific breakthroughs, as well as preventing many talented scientists from pursuing their passion.

Problem #3: To translate scientific breakthroughs into practical technologies is very difficult.  To successfully commercialize breakthroughs is even more difficult, partly because of  premature or poorly executed work.  Most scientists know little about the biotechnology, pharmaceutical or business environments.

Our Solution:  We have developed a novel approach to educating young people who are interested in science: education only through scientific discovery and entrepreneurship. Our four-step sequential method involves immersion, incubation, formulation, and realization (IIRF) to train renascent Independent Scientist Explorers (rISE), scientists who explore fundamental questions as their intellectual forebears did, before the contemporary era of science as a commodity, when sheer productivity dominates quality. Students are taught to recognize and then solve significant unanswered questions. By not being told what to do, but rather by being encouraged to push the envelope, students are placed in a permissive environment, allowing their own creativity and originality to develop, independently of the repressive influence of social and cultural conformity.  Our approach reciprocally benefits both the educational and the scientific research process.  Our students agree to a social contract to recreate the RSI experience in their own labs. Thus, effectually disseminating and perpetuating the RSI experience for future generations.

RSI is located in the heart of the Silicon Valley, has scientists and instructors with years of biotechnology and academic experience.  In addition to invoking the spirit of exploration, we instill the basic principles of successful entrepreneurship, ensuring that our students and scientists are aware of the biotechnological potential of important basic research. rISE also stands for renascent Independent Scientist Entrepreneurs.  An important goal of of our initiative is to overcome the cultural bias of pure science against commercialism.  But most importantly, RSI members can draw a realistic road map for actualizing their innovation.  For example, well-paved roads are much easier to transit than paths through an unexplored jungle, but well-paved roads may be too heavily trafficked. Our expertise helps avoid false starts, serious pitfalls and increases the likelihood of successful commercial development.

A revolution in the making

A key logistical problem in scientific research is the extended data acquisition times that impede troubleshooting.  Our lab automation initiative relies on robotics and machine learning to facilitate more rapid turnaround of scientific experiments to solve this problem.

Using the latest advances in communications technology, from GoPro cameras to virtual and augmented reality devices such as the Hololens (TM) (when it becomes available), we have ambitious plans to share our methods with the world via video and live interactive access.  RSI is creating a global interactive classroom using Open Edx, the latest in massively open online course (MOOC) technology, replete with customized human and AI-based synthetic biology simulations and materials.  Students, including those in deprived environments, will be exposed to a new way of thinking through the eyes of our interns, and encouraged to participate remotely .  Training renascent Independent Scientist Explorers and Engineers.

We are strongly committed to the education of young scientists.  Nobel laureate Sydney Brenner has been quoted as stating that to have original insights it is necessary to see the world through unprejudiced eyes.  A consequence of this is that young people, just beginning their scientific careers, might have the best chance to make truly groundbreaking discoveries.  We believe there is much truth to this.

This serves as the basis of our method: teaching through key discovery. 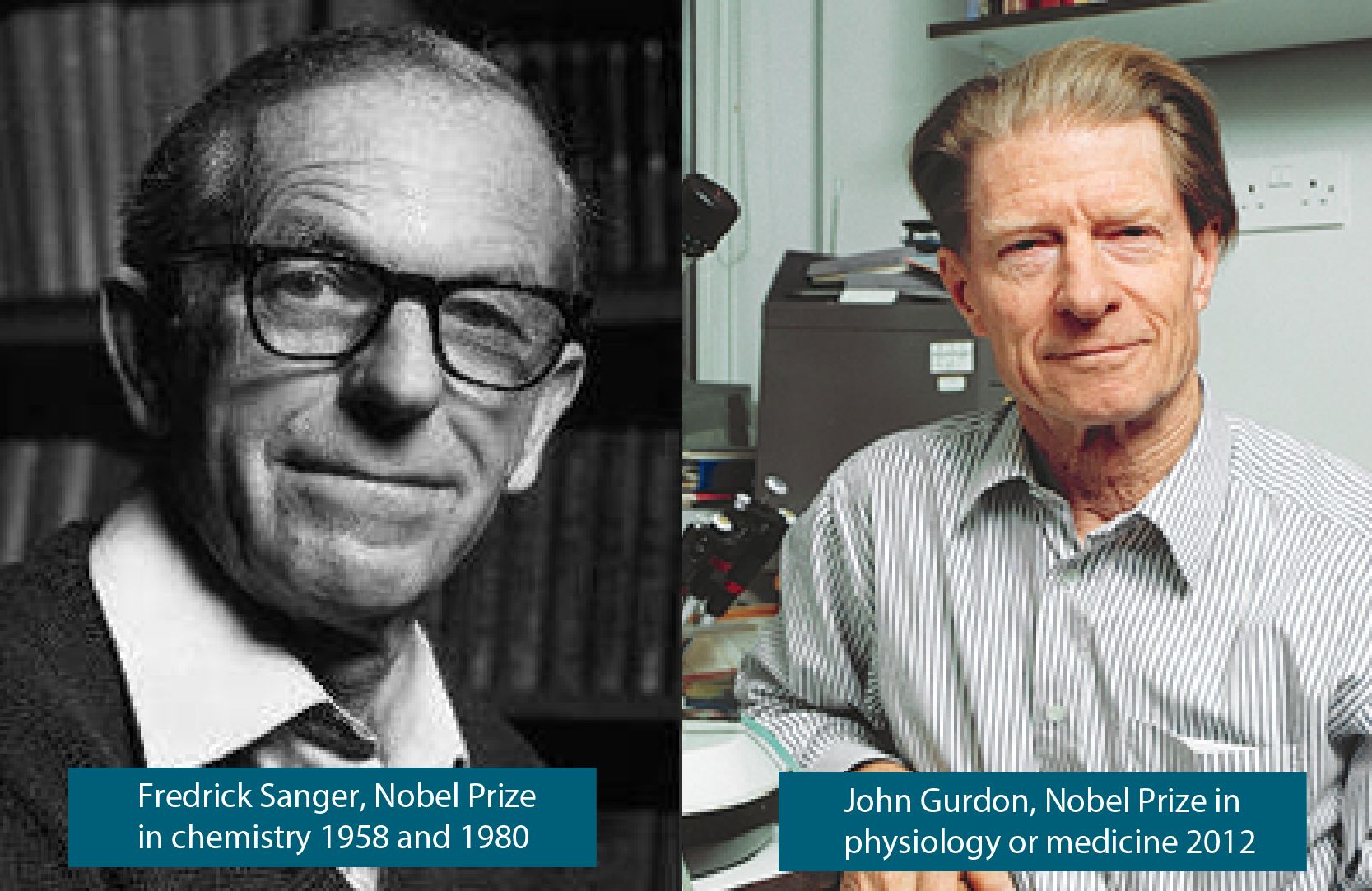 Nobelist Sydney Brenner has written that Fred Sanger, winner of two Nobel prizes, working predominately in the 1950s-1970s would never have succeeded in the current scientific environment, denying the world the fruits of his genius.  Sanger was not productive enough by current standards to get funding and would have been forced to leave science.  However, the tiny MRC labs at Cambridge University has promoted a culture that nourishes individuals who seek solutions to risky big questions by guaranteeing funding over the long term for promising individuals.  MRC researchers have won an unprecedented 22 Nobel Prizes.  For example, Watson and Crick discovered the structure of DNA in 1952 at MRC.  An even less likely success is Sir John Gurdon, another former MRC member, who discovered somatic reprogramming by cloning frogs from single cells in the 1960s.   Gurdon was at the bottom of his class of 250 students at Eton College and an instructor wrote of him: “I believe he has ideas about becoming a scientist; on his present showing this is quite ridiculous.”

Lessons from the Past inform our roadmap for the Future

Over the years we have created free programs to teach young people how to conduct scientific research with an emphasis on teaching the skills necessary to think critically and design experiments.  Our current educational initiatives derive from our years of experience in promoting creative interdisciplinary scientific work, but our plans for the future are far more ambitious.  There is much work to be done, and funding to procure before we can fully implement our vision: we welcome your help.  Nevertheless, we currently offer internships for: young people contemplating a career in science, young scientists who would like to pursue more creative work than the current biomedical funding system typically allows, and individuals desiring to enter the biotechnology field.

Although RSI offers a variety of free educational programs, it is the Undergraduate Fellows Program that best exemplifies the quintessential RSI vision. The program structure stems from the personal training experiences of its founders –  laissez-faire science.  We challenge our fellows to do something extraordinary and then give the freedom and resources (to the extent we are capable) to proceed.   Independence– with guidance close at hand when needed or asked for.  We wholly embrace Physics Nobel Laureate Andre Giem’s philosophy.  To paraphrase:

“I want students to come to me with a crazy idea. We’ll let it marinate, while we do our due diligence. By the end, I want to show them that there is a fine line between crazy and ingenious, and it starts with knowing if what you are proposing is feasible, with the current state of technology…..The lessons learned – and there will be many – come from making mistakes along this journey.”  –Jennifer Lei

Giem is the only Nobel Prize winner (for discovery of the wonder material graphene) who also won an Ignoble Prize (for levitating living frogs with magnets).  Giem is not afraid of ridicule or willing to temper his creativity.  With great risks, great rewards are possible!  Of our former fellows, three are currently enrolled at MD/PhD programs at prestigious medical schools.  We have great expectations for our fellows’ futures.

RSI believes that a rising tide lifts all boats.  Biotechnology 2.0 or as it is now called “synthetic biology” is the space program of the 2000’s.  Our aim is to reintroduce the excitement and energy that the U.S. space program and lunar exploration of the 1960’s did for STEM education.  The excitement of synthetic biology derives from the capability of literally changing the organisms in our immediate environment, or even ourselves.  Combined with our methods that reintroduce the importance of the old-fashioned empirical scientific methods, we believe that RSI will help lead a vanguard of change that actually promotes STEM education effectively.

In 2007, 2008, and 2009 , RSI participated in the International Genetically Engineered Machine (iGEM) competition, a spawning ground for synthetic biology, as the Bay Area RSI iGEM Team, which was composed of UC Berkeley and Stanford undergraduates.  The iGEM competition has many of the same goals as we do by allowing students to design their own projects– but the limited time (3-5 months) and faux competition aspect detract from fostering true independence and creativity. During 2007-2008, there was no official Stanford iGEM team, so we were their de facto unofficial team. Our iGEM projects focused on applying synthetic biology to aspects of repairing infarcted hearts, ranging from the detection of infarcted cardiac cells to a safe differentiation mechanism of stem cells into cardiac cells at the site of damage, as well as building silicon-based bacteriophage-derived  nanomachines to destroy cancers.

Some of our most promising interns have been high schoolers.  We have participated in two high school internship programs: the Bridge to Employment- Silicon Valley Program (BTE-SV) sponsored by Johnson and Johnson and the RSI High School Biology Scholars program. In the BTE-SV, each summer two selected high school interns conducted highly creative research (novel protein fusions for tumor suppressor protein therapeutic delivery and DNA nanomesh for cancer therapy) at RSI over the summer in 2010, 2011 and 2012.

To take what we have learned about education to the next level we are implementing the Science Explorers Initiative, where virtual and augmented reality will bring our approach to a new generation of students.

Introduction to Synthetic Biology for Scientists and Biohackers
This lab-based course will introduce synthetic and systems biology approaches and methods from a basic science perspective.

Introduction to Synthetic Biology for Entrepreneurs
This lab-based course will introduce synthetic and systems biology with the goal of producing a proof-of-concept project for possible commercial development.

Please visit our education portal for archived educational material.  Two courses on stem cell biology were co-taught by members of the RSI team at University of California at Berkeley in 2005-2006.  Please login as “Guest” to view the content.

In addition we have prepared a short guide to the culture of embryonic stem cell lines that can be found here.